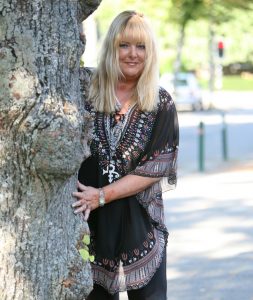 In the summer of 2016 Nancy Polet felt the urge to visit The British Museum in London. Inside, Nancy was drawn to a very much “alive” statue of the Egyptian Goddess Sekhmet. An overwhelming feeling of recognition and a profound memory surfaced. Nancy found herself to be in communication with Sekhmet. Nancy was familiar with this and felt an enormous possessiveness. She felt: “She is mine and I am  hers”. Tears started to flow and Nancy could not stop gazing into her eyes. She detected a consciousness and received overwhelmingly comforting love. To Nancy this statue was imprinted with the essence of the Goddess. Synchronicities started running wild and the Goddess called her back 2 more times that year.

As a result of this and other very personal experiences Nancy started extensive research on Sekhmet, but also on Lion Beings and White Lions. Her research is based on many Egyptological books and papers, spiritual books, channelings and oral traditions, but also on several conversations with likeminded people.
Nancy found that Sekhmet, the Lion Beings and White Lions are deeply connected.
Since 20 years more and more spiritual books about Sekhmet are being published. The authors all testify about personal spiritual experiences with an “alive” statue of Sekhmet, either in Karnak or inside several musea. At the moment many people are being called 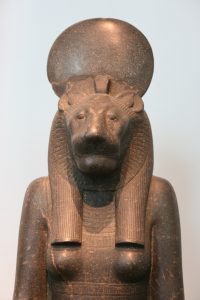 Sekhmet. She is the original force that drives creation. She also is the protector of the Goddess Ma’at, who is the Goddes of thruth, justice, balance, harmony and cosmic laws.
Sekhmet is the most powerful of all the Egyptian Gods and is also called “Lady of all Powers”,  “Eye of Ra”, “Mother of the Gods” or “The One that was before the Gods were”. She is older than time itself. Wisdom Keepers from Egypt suggest and believe that her husband, the God Ptah, in his creator aspect, originates from the Sirius Star System.
In times of chaos Sekhmet comes to the earth to restore balance and burn away chaos. But she also transforms her worshippers. In that case she devoures everything that is holding you back and breaks you down. Then she heals you, builds you up again so you are prepared for the challenges of the current time. Thus, Sekhmet destroys and heals. 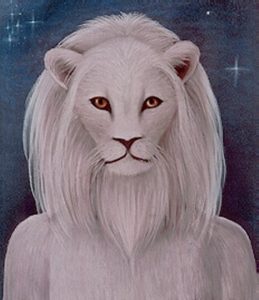 Lion Beings
As a result or her Youtube talk Nancy was contacted by many people who have a connection with visible or invisible, but physically touchable Lion Beings who contact those people telepathically. According to channelings these Lion Beings originate from planet Sirius, a blue-white star in the constellation of Canis Major, 8,5 lightyears from earth.
On their homeplanet war, sickness, greed or perversion did not exist and they were eager to share their knowledge with others. Thus, several Lion Beings travelled to earth about 1 million years ago, when humanity and the Lion Beings were still able to meet each other physically. Lion Beings stand erect on 2 legs and are taller than we are. They are warm and friendly, capable of deep dedication and unconditional love. Also they are creative, practical, grounded en physically very strong. They have a lot of humor and they are cuddly. They do not eat meat. Evolution caused them to discard their furry bodies and they now are beings of pure energy, lightbeings. Being time travellers from the future they still show themselves to people in a recognisable shape.
The Lion Beings keep an eye on the earth concerning equality between harmony and chaos. When one of those tends to dominate it is their task to restore the balance. The only way chaos on earth can dissolve is for the earth to reach a certain higher frequency, that negative forces and those who feed them will not be able to cope with. 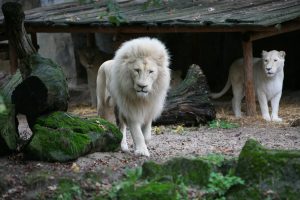 White Lions
Africa’s most prominent shaman of Great-Zimbabwe, Vusamasulu Credo Mutwa broke his  “oath of secrecy” he was bound by together with other high shamans within a secret oral tradition. He did this because we live in a prophetic time which requires to bring this knowledge in order to save the world. Credo narrated about the origin of the White Lions. According to legends they appeared in the far past in the area of Timbavati, Africa, after a meteorite came down. They are unique in the southern part of Africa. They represent a genetic rarity, they have blue eyes and therefore are not albino’s. Only a handful of White Lions live in the wild, hundreds more are bred in captivity.
Credo told that one of the oldest and wisest startribes in Africa have memories of a mysterious country with enormous pointy square mountains. A country that was ruled by a God with the body of a human and the head of a lion. The tribes tell that their ancestors originated from this mysterious land of the Gods, who themselves originated from the planet Sirius. They also tell that the White Lions are signs of changes on earth and therefore need to be protected. On december 25th of 2000, Chrismas Day, a White Cub was born in a village called Bethlehem in South-Africa. The tribe-eldests say that she was “The One” they had been waiting for. They named her Marah, mother of the Sungod Ra. Her birth means that we have reached a time of evolutionary change and spiritual awakening.
Marah is the first wayshower who arrived to remind us of our divine origin, when we were still one with all of life in Zep Tepi, the land of First Time. Marah brings fierce feminine creative power to restore balance on earth. She opposes injustice, like an incarnation of Sekhmet. Change happens when the amount of people involved is big enough to turn the tide, also called “the critical mass”. The message here is a message of hope.
On the 31st meridian or Nilemeridian places like Gizeh, Memphis and Timbavati can be found. In Gizeh one can visit the sphinx, Memphis was the place of worship for Sekhmet and White Lions appeared and were born in Timbavati.

Talk
Nancy will explain the connection between Sekhmet, the Lion Beings and the White Lions further with stunning pictures and footage. She will also share several personal experiences. The evening will end with a guided-meditation during which the audience will be invited to experience and incorporate the “living” energy of Sekhmet for themselves.
Currently Nancy is writing a book on the subject. 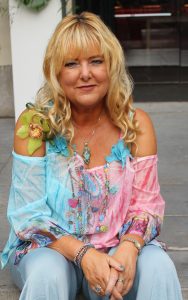 Dion Fortune
In 2010 Nancy had a powerful mystical experience in The White Spring in Glastonbury which led her to study magic and in particular the work of magician, occultist and writer Dion Fortune. She lectured and wrote several articles about her experience and extensive research on Dion which were published in various spiritual magazines.
https://www.skyhighcreations.nl/wp-content/uploads/2013/02/The-life-and-spiritual-sex-magic-of-Dion-Fortune-by-Nancy-Polet.pdf

Sekhmet
Nancy started giving talks about Sekhmet in 2016 and was invited by The Glastonbury Symposium in 2017 to give her talk “When Sekhmet Becomes Alive”. In august 2017 a video registration was made of her talk by Miles Johnston from The Basis Lecture Series who put it on Youtube. In the meantime she wrote and published several articles about Sekhmet.
https://www.youtube.com/watch?v=FVkJqiYk5xE&feature=share

Pictures taken during the lecture “When Sekhmet becomes alive” in december 2016:
https://www.skyhighcreations.nl/fotos/nancy-polet-als-sekhmet-tot-je-spreekt-8-december-2016/