I call on you to participate in a weekly Group Meditation every Saturday, starting from 8.00 to 8.15 pm CET (7.00 to 7.15 pm GMT). The goal is to turn this crisis around. The 1st Meditation took place Saturday October 30th 2021. By the end of every week, you will receive new instructions for the next Meditation by email.

What’s going on?
In The Netherlands, Freedom Fighter Willem Engel will be held in custody at least until end of March. According to his lawyer Jeroen Pols he will probably stay in custody for the coming months. He will be used to set an example. He is the most prominent Freedom Fighter, but he is not the only one in custody. His lawyer says that in this way freedom of speech is definitely in danger, as people with an inconvenient opinion apparently can be arrested at any given time. This could mark the end of the Rule of Law.
At the last March for Freedom, last week in Amsterdam there were much less people than usual. Because restrictions have been lifted, one may think that everything is back to normal. But it is NOT. Keep fighting for freedom and stay active!
Worldwide, all eyes are on Ukrain. According to the Dutch newspaper “De Andere Krant” (The Other/Different Paper) it looks like the US are creating an area of permanent chaos in Ukrain. This policy has been going on for quite some time. On top of that, the war in Ukrain sheds light on the American Biolabs where bio-weapons are being developed.
Mainstream news talks about Nato having to stand up against Russia and the creation of a new cold war!
Meanwhile, the new world is unfolding itself. Many good initiatives for a sustainable world are being developed by various groups of people. 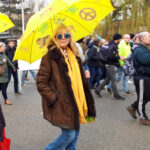 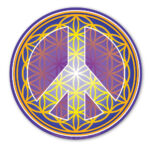 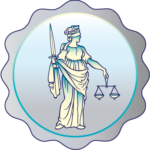 You cannot. Just follow the instructions of the Meditation.

Just do the Meditation when you are able to. You can join the group again the week after.

Dion Fortune suggested that the process would be more effective if everyone would do the Meditation daily. In modern times that is not always possible.

The subject of this week is: “The Power of Silence to bring Serenity”.

The Life and Magic of Dion Fortune:
War, death and the Society of the Inner Light
Dion changed her mode of life with the onset of the Second World War. She met a more varied assortment of people, was not as exclusive as she used to be, and flung herself into society. The group spent most of their time in London and went to Glastonbury for weekends and holidays. In Glastonbury still most of the Work was done on the Elemental and Spiritual Level.
At the beginning of the Second World War a lot of people were no longer able to attend Dion’s lectures. For this, The Inner Light Magazine proved to be a solution. But at the same time she started sending weekly Magnetized Letters to all her readers. The first Letter she sent was on October 8th 1939 and contained the Message that Great Britain was in danger. People were expected to Meditate on a theme, often Golden Dawn Symbols or national Archetypes. They were asked to mentally imagine standing on the Tor with King Arthur and Merlin. The Glastonbury Forces were evoked in this way.
These Meditations had the aim to reach the Group Soul of the nation. This Work went on throughout the whole war. By the time the fourth Letter was sent, Dion felt the Symbols had come to Life and contact was established with the Inner Worlds. Dion knew the Nazis used perverse powers to influence the outcome of the war. Dion in her place tried to transform these powers. She did nothing to hurt or destroy the enemy, she imagined a healed Germany in Peace. The Letters were published in the book The Magical Battle of Britain.
Dion had given all her energy to this Magical Battle. In the autumn of 1945 she went on holiday to Glastonbury. She returned not feeling well and she was brought to a London hospital. She suffered from a toothache, blood-poisoning and acute leukemia. She died a few days later, aged 55, on the 8th of January 1946.
After Dion’s death the group changed the name into the ‘Society of the Inner Light’. To make sure that nobody else could contact Dion in the afterlife they destroyed almost all of her photographs, diaries, personal objects and Letters in a shameful ceremony. They were very much afraid a personal cult around Dion would start.
The Society still does publish her books but they distanced themselves from most of them, except The Cosmic Doctrine and The Mystical Quabalah. Information about the Inner Work and about Dion herself is kept secret. There is no talking with outsiders of the Society. The only thing which does exist again is the magazine The Inner Light, which you can still subscribe to.

Nancy on the Subject:
“We know that governments and authorities like the World Economic Forum and World Heath Organisation are using perverse powers to influence the outcome of the ‘corona-war’ and the ‘Ukraine conflict’. Let us transform these powers. Let us be serene and do nothing to harm or destroy the enemy (just Protest, March Peacefully and Meditate). Let us imagine a healed and peaceful world, thus materialising that Image.

The instructions have changed.

Nancy rings 7 bells (a hotel-bell, a metal wind-chime, several brass bells, several Tibetan bells and a set of Chinese Chi Balls which open Sacred Space for Everyone and set Protection.

Stage 1: After reading this email, sit in a shimmering room and light several candles and some good incense. Sit with your feet and knees parallel but not in contact, and hands laid flat along your thighs, or assume the Lotus Position and put your hands on your knees. If necessary support your back.

Stage 2: Think of the subject of this meditation, which is: “The Power of Silence to bring Serenity”. Use the Symbol of the Flower of Life, containing the Peace-Sign.

Put your chin down a bit;

Roll up your tongue against your palate;

Take a deep breath through the mouth, hold the breath with your hands on your knees. Or alternatively, assume the Lotus Position, stretch your arms, placing your hands flat on the floor in front of you. Next, breathe out through the mouth and then breathe normally again.
After some time, bend over to the right with your right ear to your right knee and concentrate of the left part of the brain. Slowly come back to the middle position.
Next, bend over to the left with your left ear to your left knee and concentrate on the right part of the brain. After a while, breathe deep and rise up. Finally, breathe normally again.

Rolling up your tongue against your palate while breathing in and out through the mouth has many advantages. It purifies the mouth and the food and it is beneficial for digestion. It is the drink of the Yogi’s; you will get more and different saliva. Over time that will result in better control over what you eat and what you say. You tend to talk less and become more aware of your emotions. Finally you will experience less hot or cold: Rolling up your tongue keeps the body cool.

Stage 4: Focus mentally, in the name of “All That Is” to service to the Collective without distinction between Friend and foe. Let the Good that you are about to invoke come through for all, relying upon Cosmic Law to adapt it to the needs or healing of the Collective.

Stage 5: Open your mind for the Power of Silence.

Stage 6: Meditate once again on the subject set for the work of this week: “The Power of Silence to bring Serenity”.

Stage 7: At the end, say out loud: “It is finished!”. Rise from your seat and stamp your feet firmly to make sure you are fully grounded. Blow out the candles, leave the incense to die out. Next, start doing something to distract you.

Keep strictly to the Method. It is only by single-pointed teamwork that results are obtained. Never attempt to deal with specific problems just on the Physical Plain. Bring forth Spiritual Force and leave it to that Force to work it’s own way.

Every Meditation will be different, serve another purpose, but the effect will be noticeable. Every email will contain clear instructions. Everyone can participate, you are free to pass on the Message. There is no need to sign in.

We will not be using Zoom or Facebook Live in the foreseeable future, as we have a large Dutch audience as well as an International one. But you can easily do the Meditations on your own. We will spread the Message all over the world as we need as many participant as we can get.

Suggestions and sharing of experiences is much appreciated. Messages are welcome via info@skyhighcreations.nl, use “Group Meditation” as a header.

Good luck and thanks for participating!

More info about Dion Fortune you can find in my article “The Life and Spiritual magic of Dion Fortune”, published in VAMzzz Magazine no. 4.

The book “The Magical Battle of Britain” with introduction and commentary by Gareth Knight, is available on Amazon

TOGETHER WE TURN THIS CRISIS AROUND!